In 2016, a new region called Occitanie appeared on the map of France, between the Rhône and the Pyrenees. The name Occitania or Occitanie had been used, for this same territory with some variations, almost without interruption for more than 500 years, from the 13th to the 18th century, by the Kings of France, successive Parliaments and the Estates of Languedoc. Subsequently, in the 19th century, linguists, poets and writers used this same name for a much larger region, from Italy to the Atlantic and from south to the Pyrenees, where the langue d’oc or occitan is spoken. The term Occitanie covers two legitimate but quite different entities.

As a symbol of Occitanie, the Occitan Cross, formerly the Languedoc Cross, appears on many coats of arms or logos of regions, cities, organizations and associations in Occitan lands, between Italy and the Atlantic Ocean. Characterized by its twelve spheres, the origins of the Occitan Cross are uncertain and its meanings diverse (solar, zodiacal, esoteric…). It appears from the 12th century on the coats of arms of the Counts of Toulouse and since this time has been widely used, a respected and familiar emblem for both the manifestations of the term Occitanie. Occitan language, or langue d’oc, is a romance language with latin roots. We find the first trace of the langue d’oc, in the work of Dante, an italian poet, then later in administrative texts from the 14th century (lingua o citana).

Occitan language’s territorial spread represents nearly one third of the French territory. This language is spoken in 34 departements, and also in 12 Italian valleys as well as the Val d’Aran in Spain. The language has several nuances and dialects, including Languedoc, Provençal, Gascon, Limousin, Auvergnat and Vivaro-Alpine.

From the 10th century, occitan language has forged its reputation as a language of literary creation, especially within the Troubadours movement. Contrary to popular beliefs, a Troubadour is not an itinerant going from castles to castles to sing about love, but instead, he is a duke, a nobleman, able to read and write. Inventors of courtly love, the writers of the Troubadours movement are today considered representative of the Occitan way of life in medieval times, a world of sharing and Convivencia, where cultural and commercial exchanges with the Mediterranean world were numerous.

The Occitan Troubadour movement ended in the late 14th century, but the influence of this cultural movement is still present today. In the north of the French kingdom, we saw the emergence of the Trouvères movement, poets and composers of the language d’OIL.

In Spain Catalan poets of the Middle Ages wrote their poetry in Occitan, and in Portugal the graphic system still used nowadays is the same as that used by the Troubadours. In Germany, the inspirations for the Romantic movement draws heavily from the texts of the troubadours. And in Japan, Occitan is taught and is at the heart of social-linguistic research at Nagoya University.

While the population of “natural” speakers is decreasing and aging due to a lack of family transmission, school learning of Occitan is on the rise and is taught from kindergarten to university level. Langue d’Oc is an ancient cultural and linguistic heritage ; in the modern day it is a language of artistic and literary creation, present in the media (press, television and regional radio stations), cultural activities, tourism, publishing… 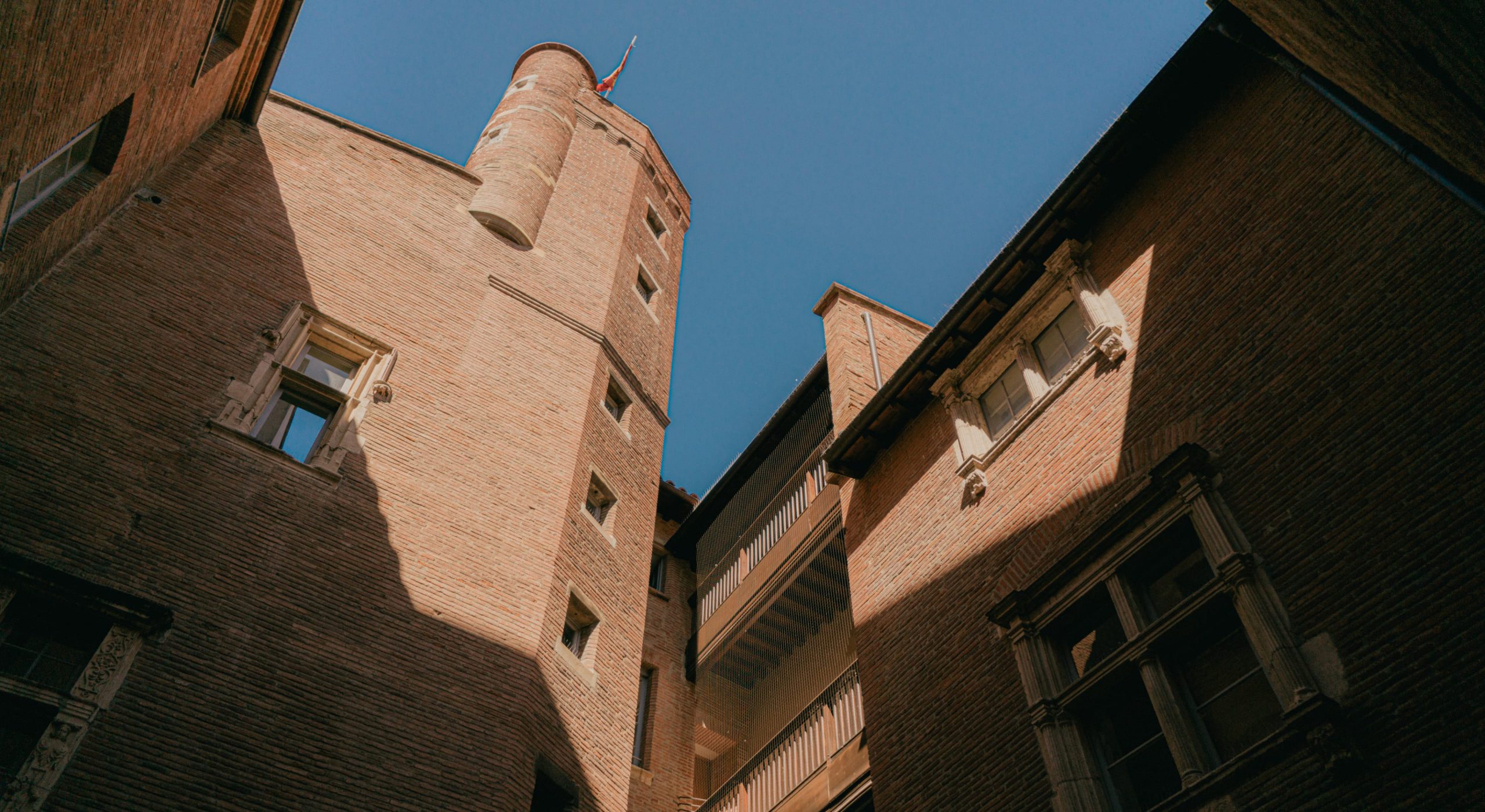 L’Ostal d’Occitania occupies the former house of Capitouls Huc de Boysson and Jean de Cheverry. Dating back to 15th and 16th century, this hotel belongs to the city hall of Toulouse.

The Toulouse capitoulat was the form of communal administration that led the city of Toulouse from the medieval to the early modern period (from 1147 to 1789.) The city’s magistrates were known as the capitouls, elected each year by the various districts of the city in order to constitute the municipal council.

The islet of the Boysson-Cheverry hotel

An islet, called moulon in the Toulouse archives, is a group of buildings delimited by streets and squares. The shape of the islet and its evolution over the centuries, tell us the story of a city, such as the transformations of habitat and ways of living. The islet of Boysson-Cheverry is located on Rue des Changes, Toulouse’s most important north-south axis since Antiquity.

On the ground floor, the shopkeepers arches testify to the commercial function of the artery, with access to housing by the walkway that leads from the street to the staircase opening to the backyard.

This islet – whose morphology has changed little over time – has a square shape. It is closed and built with blank spaces in its center. The plot is a mix of small plot in strips, and larger ones developing in the heart of the block. The urban fabric responds to an infinite variety of facades, arrangements, patterns and materials ranging from the Middle Ages to the present day. The rich heritage of the islet is due to its buildings as much as to its mansions (Vinhas, Delfau, Brucelles, Ricardy hotels, etc.). According to historian C. Mignot, “these architectural paintings deserve attention and study.”

Remarkable unit of our streets, this hotel seems well known to us. But is he really? The urban residence of an important figure, it was traditionally inhabited by a family and its domestics. Its organization and decor guide visitors, from the reception rooms to the most intimate rooms, passing, depending on the period, through the staircase tower, the main courtyard and the lounges.

The Boysson Cheverry Hotel is the result of several building campaigns, between the 15th and 18th centuries. Following the great fire of 1463, the wealthy merchant and capitul Huc de Boysson ordered the first works, including the staircase tower opening into the courtyard. Then the hotel passed into the hands of the Cheverry a pastel merchants. New work is undertaken in the first half of the 16th century. Gothic and Renaissance styles are mixed here for the visitor’s greatest pleasure. Notice the beauty of the window details. Cut-out thistles, curled up dog, antique capitals and caryatids. These are true pieces of the bravery of Toulouse sculpture. 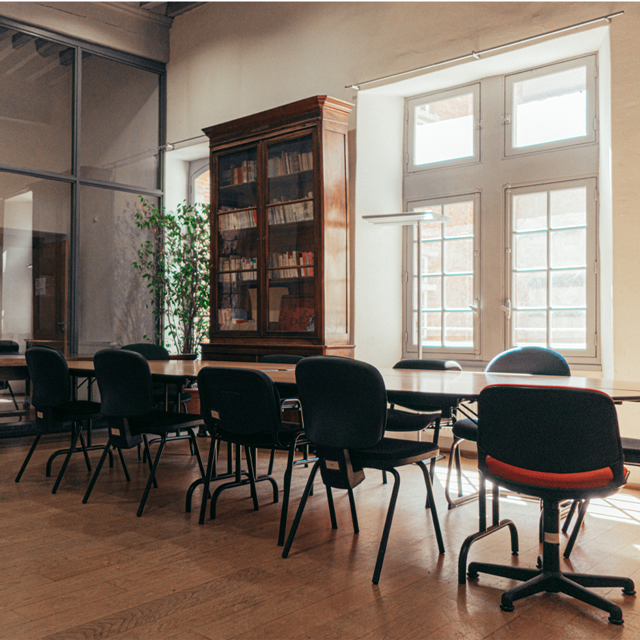 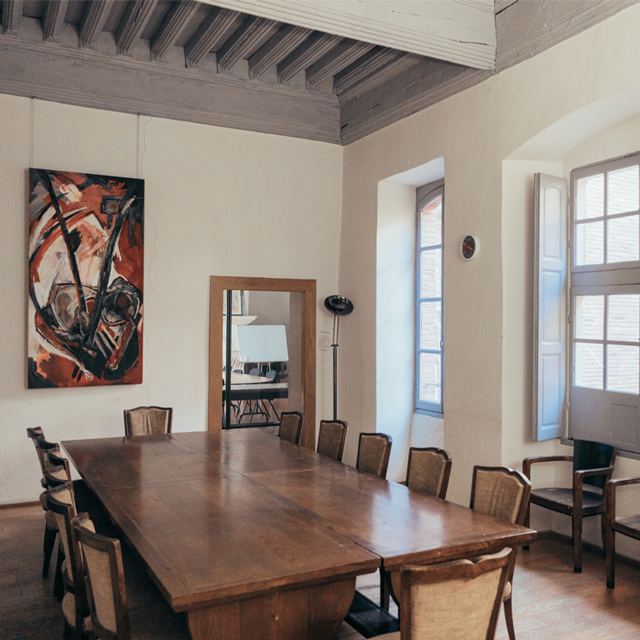 The walls of la Maison de l’Occitanie tell a rich story of that heritage. That’s why many of the exhibition and meeting rooms bear names of important figures from Occitan history.

He was an Occitan ethographer and poet. Working in a style between lyric poetry and narrative poetry, he authored a dozen books, such as Lo Got Occitan or Libre dels Auzèls. He was invested in the world of felibres and participated in the founding of the Escôla Occitana in 1919, which works for the renewal of Occitan language. He was elected majoral of Félibrige in 1892.

Nelli was an Occitan poet, philosopher and historian of Catharism. He devoted most of his work to the study and promotion of Occitan culture and Cathar dualism. His work played an important role in the advancing knowledge of Occitan culture, in particular by participating in the foundation of the Institute of Occitan Studies in 1945. He wrote Entre l’esper e l ‘Abséncia, Spiritulité du catharisme or Aram from Vertat..

He was considered as a defender of Catalan and Occitan culture. A professor at the University of Toulouse-Le Mirail, he was the president of Casal Català, the association of Catalan culture in Toulouse. As a member of the Council of Catalan Communities abroad, he participated in the decentralization of culture. In 1997, he received the Batista Prize for his work promoting Catalan Culture throughout the world. He received posthumously the medal of the city of Toulouse.